Medial Tarsorrhaphy of the eye for Ptosis

Medial Tarsorrhaphy of the eye for Ptosis 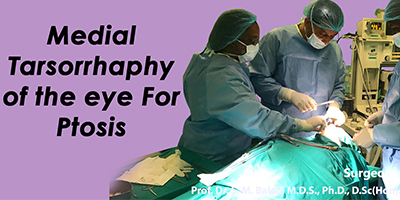 A patient is a young man who was unable to close his left eye due to ptosis. This was leading to continuous drying of the eye with the potential for damage to the cornea. He presented to Dr. SM Balaji, Craniofacial Surgeon, Chennai, for correction of his problem. Dr. Balaji decided thttps://www.smbalaji.com/dr-sm-balaji/o proceed with a medial tarsorrhaphy.

An incision was first made inferior to the left eyelid margin. This was medial to the punctum and through the skin and orbicularis muscle. This incision was then extended to the medial canthus. It was then continued along the upper eyelid. This was in a similar fashion such that it presented as a sideways V-shaped incision. Dissection was then carried out between the anterior and posterior lamella. This was along the length of the incision. The posterior lamella of the upper and lower eyelid was then sutured together with interrupted sutures. Care was always taken to ensure that the canaliculus was not damaged by the sutures. The anterior lamella was then sutured together with Vicryl sutures. These anterior lamellar sutures should not be too far medial. This is to avoid formation of a webbing deformity in the region. The patient tolerated the procedure well.