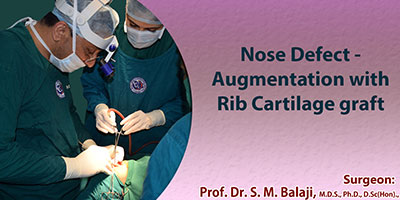 This young man from Arani in Tamil Nadu never liked his nose. He had already undergone rhinoplasty elsewhere. They had used cartilage graft from the ear. Following surgery, he still felt that his nose was very broad and flat. He desired corrective surgery and presented to our hospital for management.

Dr SM Balaji, rhinoplasty specialist examined the patient. He explained the treatment plan in detail to the patient. This involved harvesting a rib graft. The patient consented to surgery.

Under general anesthesia, a rib graft was first harvested from the patient. A Valsalva maneuver was then performed to confirm patency of the thoracic cavity. The incision was then closed in layers.

Attention was then turned to the saddle nose deformity. A transcartilaginous incision was first made. Tunneling was then done to the bridge of the nose. The rib graft was then inserted to augment the bridge of the nose. Attention was next turned to the broad ala. An elliptical incision was then placed in the right alar crease. Excess tissue was next excised from this region and the incision sutured.

The patient expressed complete satisfaction at the results of the surgery.