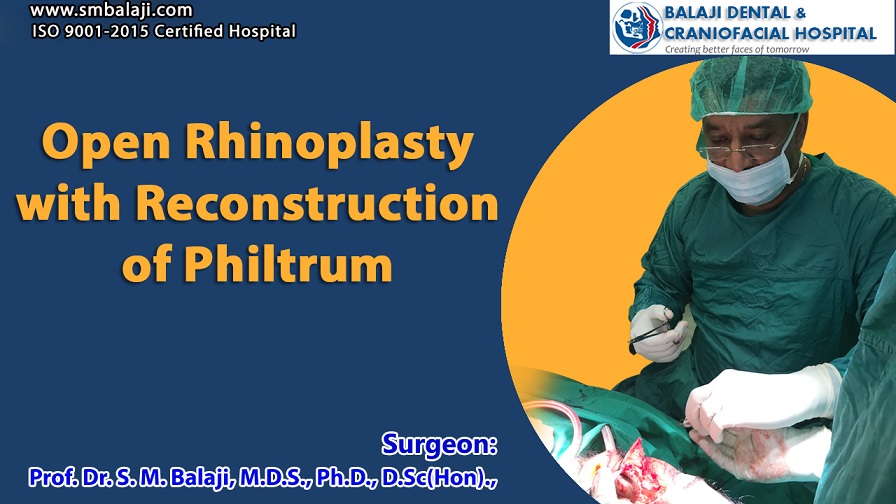 The patient is a 7-1/2-year-old girl from Sadurangapattinam in Tamil Nadu, India. She was born with a bilateral cleft lip and palate defect. It was very severe. Her parents were extremely distressed upon seeing the degree of her facial deformity. They were reassured at the hospital that this could be surgically managed.

The incidence of cleft deformities among newborns is higher in the Sadras region than the national average. Many infants born with this deformity have been successfully rehabilitated in our hospital. Some of the patients who were operated on over 20 years ago are now happily married with children of their own.

The patient and her parents were referred to our hospital for surgical management of her cleft defects. It was explained to them that the road to total cleft rehabilitation was a long one. They stated a complete understanding of this. Plastic surgeons also perform this procedure in western countries.

She first underwent bilateral cleft lip repair at the age of 3 months. This was followed by cleft palate repair at 11 months of age. The premaxillary setback with bone grafts to the region of the cleft alveolus was also performed for the patient.

Continuation of the rehabilitation process at our hospital for the patient

Orthodontic consultation was also initiated for the patient. Our hospital is a super-specialty center for cleft orthodontics in India. She will need extensive orthodontic intervention in later years.

Her teeth are malaligned due to her cleft deformity. She also has a few congenitally missing teeth. The remaining teeth will need to be brought into perfect alignment. Dental implant surgery would ensure the replacement of her missing teeth. This final step would complete her rehabilitation. Soft tissue molding would also be perfect following this step.

She still had nasal deformities that needed to be corrected. There was a collapsed columella. This caused extreme flattening of her nose. She also had a very blunt nasal tip. Some patients also have asymmetry of the alar bases.

There was also stunting of the prolabium with a resultant short upper lip. The patient was instructed to present for correction of these deformities.

Surgical planning for correction of her collapsed columella and stunted prolabium

Dr. SM Balaji, cleft nose correction surgeon, examined the patient and obtained pertinent studies. The patient would require an open rhinoplasty with the reconstruction of philtrum. It was decided to reconstruct her collapsed columella with a flap dissected from the prolabium. The resultant prolabium defect would be reconstructed using a lower lip Abbe flap.

It was explained to the patient that she would not be able to open her mouth for two weeks following surgery. This period would enable revascularization of the Abbe flap from the upper lip tissue. They were in agreement with the treatment plan and consented to surgery.

Cosmetic and functional rehabilitation of her cleft related deformities

Under general anesthesia, markings were made on the prolabium. This was followed by a dissection of the prolabium and the columella. The lower lateral cartilages were identified, dissected and separated.

Medial crura were sutured together as well as to the nasal septum. This would ensure a sharp alar dome. Prolabium was then utilized to reconstruct and lengthen the columella.

A full-thickness Abbe flap was then raised from the lower lip to reconstruct the prolabium. Extreme care was taken to ensure patency of the inferior labial artery in the flap tissue. The flap was then sutured to the region of the upper lip defect.

Abbe flap was separated after a period of two weeks. There was good perfusion of blood within the upper lip flap. She now had a sharp nose with a long columella. Her nose now had a straight profile.

The upper lip also had adequate length due to the lengthened prolabium. This provided increased lip tissue for her to appose her lips together. Visible scar tissue was also negligible following the surgery. She expressed her satisfaction with the cosmetic results from the surgery. Her parents too were very happy with the results of the surgery.