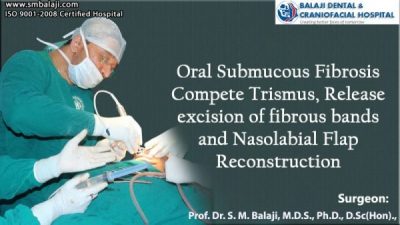 Oral Submucous Fibrosis (OSMF) is a pre-cancerous condition seen predominantly in the Indian subcontinent and South East Asia. In this condition, the deep tissues of the cheeks become thick and fibrosed leading to severely restricted mouth opening, referred to as trismus. ]

There is great difficulty in opening the mouth, patients cannot tolerate hot and spicy food, and the cheek lining inside the mouth becomes pale, blanched or marble-like. This is a very serious condition because it has high chances of advancing into mouth cancer (squamous cell carcinoma). The most common cause of this pre-cancerous condition is chewing of tobacco/areca nut.

The patient is a middle-aged man with oral submucous fibrosis who presented to Dr. S. M. Balaji, Craniofacial Surgeon, Chennai with complete trismus as a result of which he couldn’t open his mouth more than a few mm. Upon taking a history, it was found that he had been chewing paan or betel quid containing betel leaf, areca nut, and slaked lime for the past 15 years. The patient also complained of a burning sensation in his mouth. Upon palpating his cheeks, thick, tight bands of tissue could be felt lining his cheeks and he had jaw rigidity. Surgical intervention was the only viable option.

General anesthesia was given through Flexible Fibreoptic Intubation (FFI) since he had very limited mouth opening. Cuts were placed in the inner cheek and the thickened bands of fibrous tissue were excised. Mouth opening was increased to the normal 3-4 cm using a mouth gag. An inferiorly based nasolabial flap based on the facial artery was taken in such a way that the flap margin fell in the skin fold and post-surgery scar is inconspicuous.

The flap was rotated, tunneled into the mouth, and sutured to the inner cheek. The nasolabial incision was closed in layers. This was done on both sides. The patient was prescribed mouth-opening exercises and counseled on complete cessation of the habit.