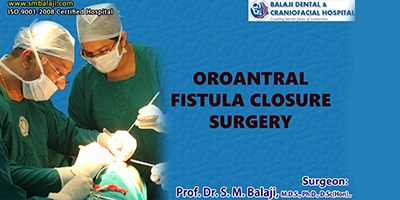 This patient developed an oroantral fistula after undergoing a traumatic extraction of the right maxillary second molar a few years ago in his hometown.   He had already been operated a few times previously, but the fistula kept recurring.   An oroantral fistula is a communication between the oral cavity and the maxillary sinus that is lined by epithelial tissue.  He was referred to Balaji Dental and Craniofacial Hospital, Teynampet, Chennai for management of his problem.

Dr. S. M. Balaji examined the patient and decided to perform a palatal flap closure of his oroantral fistula.  Following successful induction of general anesthesia, a palatal flap was raised, the epithelialized tissue from the fistula was excised and closure was obtained by suturing the flap over the oroantral fistula.  The patient presented to Dr. Balaji a month after surgery and a nose blow test confirmed complete closure of his fistula.  The patient expressed his gratitude to Dr. Balaji for solving this long standing problem, which was causing significant mental anguish for the patient.