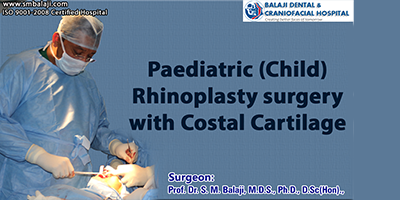 The patient had a collapsed tip of nose at birth.  This particular defect would under normal circumstances be repaired only at a much later stage, but this particular child was being picked on and mocked constantly at school by other children.  This distressed the child to a degree that it was affecting her emotional and psychological health.  The parents of the child were distressed upon seeing this and approached Dr. S. M. Balaji, Craniofacial Surgeon, Chennai, who upon hearing about the child’s plight decided to perform the surgery on humanitarian grounds.

A costal cartilage graft was first harvested from the right rib cage and the wound was subsequently closed in layers.  Following this, the costal cartilage was molded and shaped for graft placement to augment the tip of the nose.

The costal cartilage graft was tunneled along the base of the nasal septum until it approximated the collapsed tip of the nose.  Once normal nasal tip anatomy had been reestablished by proper positioning of the graft and normal profile of the nose had been regained, the graft was sutured in place.  Following this, the intraoral incision was sutured and closed. Secondary corrections might be needed at a later stage.

The patient and her parents were extremely pleased with the aesthetic results of the surgery.