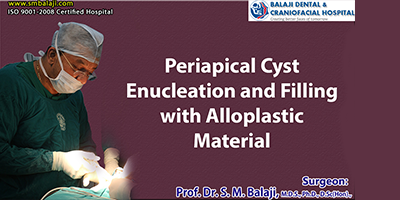 This young man presented to Balaji Dental and Craniofacial Hospital with a painful right lateral incisor associated with a swelling on the right side of his hard palate. Dr. S. M. Balaji, Cranio-Maxillofacial Surgeon examined the patient and ordered an OPG, which revealed a periapical cyst in relation to that tooth. He explained to the patient that the cyst had to be removed and the resultant bony defect filled with a bone graft material.

After uneventful induction of general anesthesia, a gingival flap was raised in the region of the anterior maxilla and pus was drained from the periapical cyst. Next, the cyst was removed from the cavity in the bone. Bone was then removed with a round bur to gain better access into the cavity and the cavity was filled with Bio-Oss, an alloplastic bone graft material. The flap was then sutured back in place and the patient recovered uneventfully from general anesthesia.