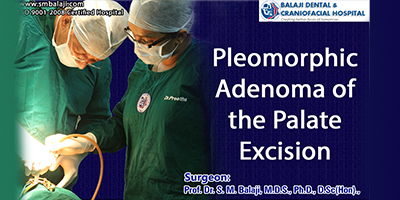 This 20 year old girl reported to our hospital with the complaint of a swelling on the left side of the palate for the past 12 years. The swelling was gradually increasing in size and it became more noticeable about two years ago.  Of late, she has been having difficulty swallowing food. After thorough clinical and radiological analysis, Dr. S. M. Balaji, Maxillo-Craniofacial Surgeon provisionally diagnosed it to be a pleomorphic adenoma.

Differential diagnoses for this included palatal abscesses, soft tissue tumors such as fibroma, lipoma, neurofibroma, and neurilemmoma as well as other salivary gland tumors.

Pleomorphic adenoma is a benign neoplasm, which is commonly encountered in the parotid gland and other major salivary glands. Infrequently, it may arise from minor salivary glands and present as an intraoral mass over the palate or lip.  Salivary gland tumors are rare and account for 2–3% of tumors occurring in the head and neck.

On examination, an oval-shaped, well-circumscribed lesion that was adherent to the underlying structures was seen on the left side of the hard palate. The lesion was about 2 cm in diameter. The swelling extended from the mid-palatal area to the border of the alveolar ridge on the left side. The overlying mucosa was smooth and intact, but was stretched and shiny in comparison to the healthy area on the opposite side of the palate. There was no regional lymphadenopathy and her general physical and systemic examination was normal except for a minor thyroid hormone imbalance with TSH being elevated.

With the help of 3-D axial CT scan, extension of the lesion was traced.  Superiorly, it extended to the floor of the nasal cavity and its posterior extension was up to a cm anterior to the greater palatine foramen. The lesion had eroded the underlying palatal bone and was well circumscribed with clear margins.

Excisional biopsy was done.  Under general anesthesia, a palatal crevicular incision was made and a palatal mucosal flap was raised along with the underlying mucoperiosteum, thus exposing the lesion. The soft tissue mass was removed in toto with good clearance and it was well encapsulated and soft fibrous in texture.   Following this, the palatal mucosal flap was approximated and sutured in position and the tissue obtained was sent for histopathological examination.  Histopathology revealed it to be a pleomorphic adenoma of the palate.  The palatal bone defect caused by erosion due to the tumor was planned to be reconstructed at a later date using auto bone graft.