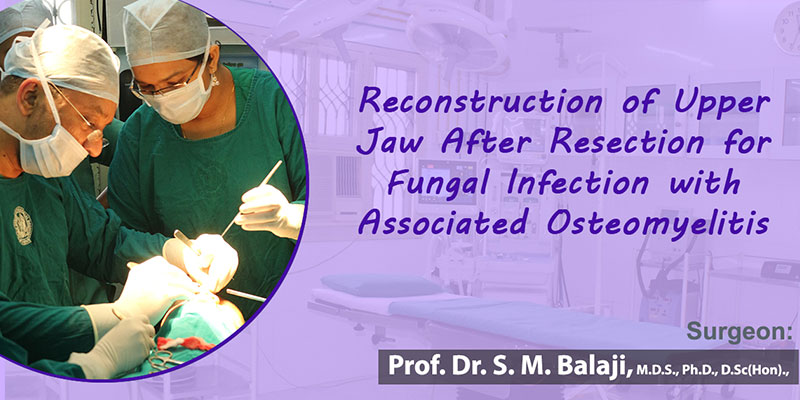 The patient is a middle aged man from Waltair. He had undergone an endoscopic surgery for clearance of maxillary sinus rhinosporidiosis. A complete maxillary resection was performed previously at our hospital to remove all affected bone and bone affected by osteomyelitis. A reconstruction was done using the remaining bone. This resection however led to a maxillary bone deficiency, causing problems with nutrition and speech. He was then sent for a course of medical treatment of his rhinosporidiosis with complete resolution of his infection. He then presented to our hospital for definitive management of his problems.

Dr SM Balaji, facial reconstruction specialist, examined the patient. A biopsy was first obtained from the mucosa. Once it was confirmed that there was complete resolution of his fungal infection, the patient was then scheduled for surgery.

Under general anesthesia, a rib graft was first harvested from the patient. A Valsalva maneuver was then performed to confirm patency of the thoracic cavity. The incision was then closed in layers.

Attention was next turned to the maxilla. A mucoperiosteal flap was then raised and plates from the previous surgery removed. Pieces of rib graft were then fixed at the deficient regions. This aided in augmenting the deficient maxillary bone. Once adequate augmentation was performed, the flap was then closed using sutures. Implants at a later date will complete oral rehabilitation of the patient.