Revision Rhinoplasty Surgery with Scar Removal in the Chest

Revision Rhinoplasty Surgery with Scar Removal in the Chest 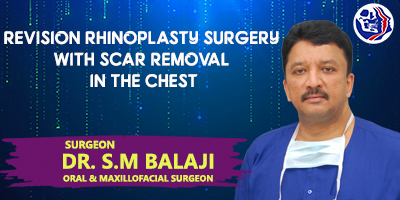 A rhinoplasty procedure or nose job is advised when a patient has breathing difficulties or excessive snoring during sleep. This can be due to a deviated nasal septum. A nasal septum deviation could be congenital or could be caused by trauma to the nasal bone. This results in a deviation in the nasal passage, thus obstructing the clear passage of air during breathing. A rhinoplasty procedure needs to be performed to rectify this. Rhinoplasty surgery restores the function of the nose back to optimal levels.

An experienced rhinoplasty surgeon instinctively diagnoses the cause for the problem and the degree of correction required in each case. There is no unnecessary excision of tissue or removal of bone. This ensures that optimal results are obtained with maximum cosmetic as well as functional benefit to the patient from the surgery. It always results in an improvement in facial features.

Cleft rhinoplasty is a highly specialized field. Only the most experienced of surgeons excel in this corrective procedure. It is a highly complex procedure and complete mastery over all the basic sciences of medicine is a prerequisite to master this.

Rhinoplasty surgery used to be confined to the rich and the famous in the past, but the number of rhinoplasty procedures has drastically increased leading to the increase in the number of hospitals offering this service to patients.

A rhinoplasty surgery requires extreme finesse and precision to give the best esthetic results. It takes years of training under an experienced surgeon to master this. When an inexperienced surgeon performs this surgery, chances of patient dissatisfaction with the results is high and this automatically leads to an increase in the number of revision surgeries being performed.

The patient is a young girl who had undergone rhinoplasty elsewhere with placement of a rib graft to augment the bridge of her nose. She had also had placement of a graft to the tip of the nose. Over a period of time, she felt that the bridge of her nose was too broad and the tip of the nose was very pronounced. She desired to have a narrower bridge of the nose and a less pointy tip of the nose. She had presented to a plastic surgeon in her hometown to enquire about surgeons performing rhinoplasty surgery in India and also scar revision surgery in India. He referred her to our hospital. She therefore presented to our hospital requesting corrective surgery as it was a failed rhinoplasty and revision was advised.

Patient presents at our hospital for revision rhinoplasty

Dr SM Balaji, a well known rhinoplasty surgeon in India, examined the patient and ordered imaging studies. As the outcome of the initial rhinoplasty was not satisfactory to the patient, she was a little apprehensive and enquired about the revision rhinoplasty swelling timeline. It was explained to the patient that the recovery period would be for a period of one to two weeks and that she would need to stay home for the first ten days following surgery. The splint that would be placed on her nose after the procedure would be removed at this point.

He explained that the graft to the bridge of the nose would need to be shaped to a finer form during the revision rhinoplasty surgery. The patient also complained of an unsightly scar at the site of the bone graft harvest from the previous surgery. It was decided to perform a scar revision surgery at that site during this surgery. The scar revision procedure would involve closure of the wound in several layers for minimal residual scar formation.

Attention was then turned to scar removal from the chest wall. An incision was made at the old chest incision scar site. The unsightly scar tissue was excised completely. A Valsalva maneuver was then performed to ensure that there was no accidental perforation into the thoracic cavity. The incision was then closed in layers. The patient’s revision nose surgery was meticulously documented in her medical records.