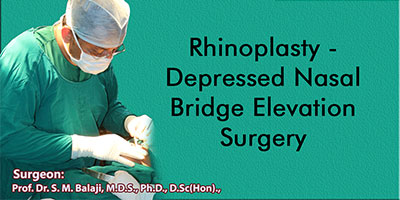 The patient is a young woman who has a depressed bridge of nose. She has never been happy with her nose. The patient had undergone maxillary osteotomy elsewhere a few years ago. Her surgeon at that hospital had expressed inability to perform nasal correction. She had searched for the best rhinoplasty surgeon in India. This had led her straight to Balaji Dental and Craniofacial Hospital, Teynampet, Chennai.

Dr SM Balaji, nose correction specialist, examined the patient. He then ordered imaging studies for the patient. The patient still had retained plates and screws from her old osteotomy surgery. Dr. Balaji explained the treatment plan to the patient and her parents and they were in agreement.

Under general anesthesia, two cartilaginous rib grafts were first harvested from the patient. Valsalva maneuver demonstrated absence of perforation into the thoracic cavity. The incision was then closed in layers.

Attention was next turned to the retained hardware from the old surgery. The hardware was first removed through a maxillary vestibular incision. The incision was then closed with sutures. Attention was then turned to the nose. Intranasal incisions were then made. Lower nasal thirds of the alar cartilage was next excised and removed. The cartilaginous grafts were then inserted through the incision. This was then tunneled up to the bridge of the nose. The tip of the nose was next lifted up with the aid of a cartilaginous graft. This resulted in the patient getting a straight bridge of the nose with a nice nasal tip.

The patient expressed satisfaction at the results of the surgery. She was then discharged from the hospital.