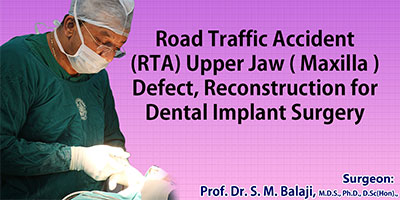 Patient with partial edentulousness presents for implants at our hospital

This young man is from Ranchi, Jharkhand. A biking accident resulted in direct trauma to his jaws and oral cavity. He suffered fractures to both jaws as well as to many teeth. Fracture fixation and fractured teeth extraction was first performed elsewhere. This surgery resulted in a bony defect in the left maxilla. He desired complete oral rehabilitation with implant placement for missing teeth.

Treatment planning presented to the patient after diagnostic studies

The patient presented to our hospital for oral rehabilitation. Dr SM Balaji, Implant specialist and facial trauma specialist, examined the patient. He ordered a 3D CT scan and other imaging studies. This revealed a bony defect in the left maxilla. There was also a periapical cyst in the remaining left upper central incisor. He explained to the patient that the tooth needed to be extracted. Rib graft was necessary for implant placement in that region. The patient agreed to the treatment plan and consented for surgery.

Under general anesthesia, an inframammary incision was made to harvest a rib graft. A Valsalva maneuver was then performed to ensure patency of the thoracic cavity. The incision was then closed. Following this, a maxillary flap was then raised and the central incisor extracted. The periapical cyst associated with the tooth was then enucleated. Rib graft was then used to augment the left maxillary defect. It was crafted to the correct size and fixed with screws. Implants will be placed around six months after fusion of the rib graft to the underlying bone.

Successful implant placement in edentulous regions of the oral cavity

The edentulous regions of the oral cavity were then addressed. Implants were then placed. A bone graft was then placed in the anterior mandible to stabilize the anterior implants. Crown placement will be done in three month’s time after osseointegration is complete. All plates and screws from the previous surgery sites were then removed. All incisions were then closed with sutures. The patient recovered well from general anesthesia.