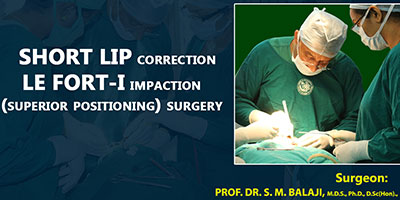 This young man presented with a vertical excess of the prognathic maxilla. It resulted in the shortening of the upper lip with inability to appose the lips. This was causing social problems for the patient. He presented to our hospital for surgical correction of his problem.

Dr SM Balaji examined the patient and ordered imaging studies. On cephalometric analysis, it was found that he had 7 mm vertical excess of maxillary bone. He explained the treatment plan to the patient who agreed to it.

Successful Le Fort I surgery with optimal results for the patient

The patient expressed his complete satisfaction at the results of the surgery.