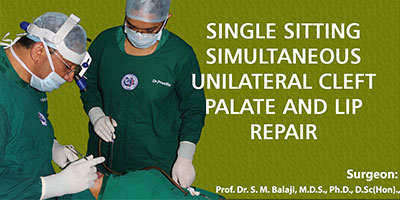 A boy from Ladakh with unilateral cleft lip and palate

The patient is a 10-month-old boy with unilateral cleft lip and palate deformity. He lives with his parents in Leh. His family is from a pastoral background. A Good Samaritan from Delhi happened on this little boy during a trek in Ladakh. He offered to help the child and the parents accepted his help. The Good Samaritan did extensive Internet research. This was to find the best cleft lip and palate surgeon who could perform a total cleft repair in one sitting. His search led him straight to our hospital.

Dr SM Balaji examined the patient and ordered imaging studies. He explained to the parents that both cleft lip and repair would undergo surgery. He undertook the surgery after detailed presurgical planning.

Under general anesthesia, cleft palate repair was first undertaken. Bilateral palatal flaps were first raised based on the greater palatine vessels. The Levator palatine muscles were then detached from their abnormal positions. These were then reattached into normal position like a hammock. A two layer closure was then done. The nasal floor was first closed in a separate layer with the vomerine flap making a reverse knot. Oral layer was then sutured by vertical mattress sutures. The vertical mattress sutures produce a ridge of thick mucoperiosteum.

Flaps were then approximated to each other in the midline. This technique repositions the levator muscle in a more favorable position. Greater palatine osteotomy was then done to mobilize the artery. This was from the greater palatine canal. The suction test performed at the end showed good results.

The parents expressed their immense gratitude before discharge from the hospital.

Everything You Need to know about Microtia Surgery