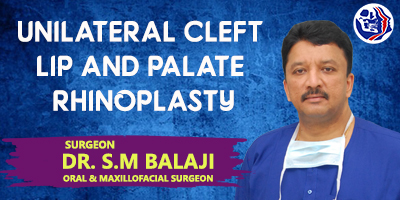 The patient presents for rhinoplasty

This young child was born with a right sided cleft lip and palate. She had undergone corrective surgery of her cleft lip as an infant. She now presents for rhinoplasty for correction of her nasal deformity.

Under general anesthesia, an incision was first made. A rib graft was then harvested from the patient. Valsalva maneuver demonstrated patency of the thoracic cavity. The incision was then closed in layers. The graft was then crafted for use as a strut graft and an alar cartilaginous graft.

Attention was next directed towards the nose. Intranasal incisions were then made to avoid scar formation. The cartilaginous graft was then tunneled into position and stabilized with sutures.

Attention was next turned to the scar from the old cleft lip surgery. Scar tissue was first marked and then removed. A small strip of tissue was then incised and removed from the outer aspect of left alar region. This was then closed with sutures. The procedure resulted in establishment of symmetry of the nostrils.