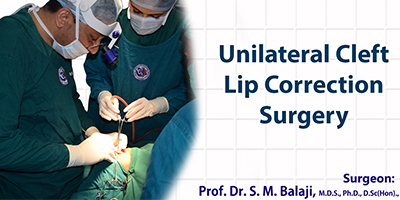 Baby boy is born with a unilateral cleft lip and palate:

This baby boy is the grandson of a famous merchant in Bangalore, Karnataka. He was born with a severe form of unilateral cleft lip and palate. There was a wide cleft space with ill developed segments.

The family searched far and wide for the best cleft surgeon in India. They made enquiries all over the country, including all metro cities. Friends too joined in the search for the best hospital. One friend finally zeroed in on Balaji Dental and Craniofacial Hospital in Chennai. Further enquiries revealed it to be a world-renowned centre for cleft correction. The parents then made discreet enquiries about the hospital. Once satisfied, they presented at our hospital for repair of the cleft deformity. Dr SM Balaji, Cranio-maxillofacial surgeon, examined the baby. He decided to perform a modified Millard’s Technique to repair this baby’s cleft lip defect. Dr Balaji explained this to the parents in detail. The parents consented to the operation.

Perfect adaptation of the cleft halves of the upper lip:

A modified Millard’s technique leads to less scarring. It also gives better functional and esthetical results. Customization of the approach depends upon the degree of cleft and muscular involvement. Being ambidextrous (the ability to work with both hands) is an advantage for this surgery. A modified Millard’s flap was first employed. The C flap was then used to recreate the nasal sill while the M flap was next used to create the floor of the nose. All tissues were well used in the reconstruction and there was no tissue wastage. There was a perfect adaptation of the two halves of the cleft.

Need for further surgeries explained to the parents:

The need for further surgeries was then explained to the parents. This would be necessary for the complete rehabilitation of the baby’s deformities.