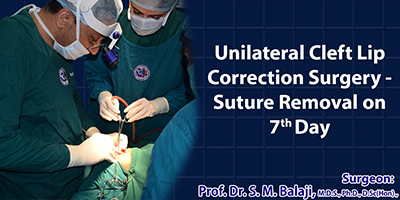 This is a 2-month-old baby boy from Sri Lanka who was born with a unilateral cleft lip and palate defect. His parents related that his elder sister had also been born with the same condition. She had been operated on elsewhere in India, but the surgery had left behind ugly residual scars. So when their son too had been born with a similar deformity, they wasted no expense in searching far and wide for a cleft lip repair specialist. They finally zeroed in on Balaji Dental and Craniofacial Hospital, Teynampet, Chennai after extensive research done over the Internet and meeting parents of previous patients. Dr. S. M. Balaji, Maxillo-Craniofacial Surgeon, explained to them that the child needed primary cleft lip repair surgery using the modified Black’s technique in order to recreate a tight lip seal. A modified Black’s technique cleft lip repair was done.

Seven days after the surgery, the parents presented with the boy at the hospital for suture removal. There was perfect vermillion border approximation, good columellar form and good overall appearance. There was negligible scar formation, which would slowly fade away over time. The baby was also feeding well. Both esthetic as well as functional outcomes of the surgery were good.

It was explained to the parents of the boy that he would need further surgeries in the future, which would have to be planned out in a phased manner for further correction of his cleft defects.