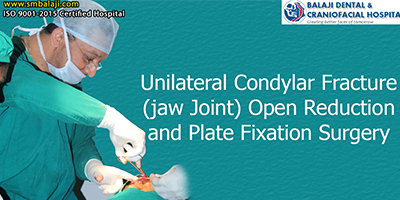 The patient is a teenage boy from north India. He had a road traffic accident. This lead to development of pain and swelling in the left preauricular region. He also demonstrated deviation of his mouth to the left upon mouth opening. His parents took him to a hospital for radiographic studies. The doctor who examined him explained to them that he had a fracture of the left condyle. He added that this needed surgical correction. Since this was a difficult surgery to perform, he said it needed expert care. He then referred the patient to Balaji Dental and Craniofacial Hospital, Teynampet, Chennai. This is one of the leading Cranio-Maxillofacial Superspecialty Surgical Hospitals in India.

Dr. S.M. Balaji, Cranio-Maxillofacial Surgeon examined the patient. He then ordered 3D axial CT scans. It revealed the fractured left condyle of the mandible. Dr. S.M Balaji then explained to the parents that the fracture was in a region that was difficult to approach. He said that the conventional method would not work. Only the modified preauricular incision approach would work, he explained. The parents were in agreement with the treatment plan. The patient was then scheduled for surgery. Treatment was by open reduction and internal fixation of his left condylar fracture.

General anesthesia was first induced. Then Dr. S.M Balaji marked the proposed modified preauricular incision with a marker. The incision was then made with great care. This was to avoid injury to vital structures in the region. The facial nerve and the parotid gland were thus protected. Dissection was then carried down to the region of the fracture of the condyle. The fractured condyle was then plated. Plate fixation check for stability was positive. The incisions were then closed in layers with sutures. The patient recovered without event from general anesthesia. He was then scheduled for suture removal in seven day’s time.

The patient presented on the seventh day after surgery for suture removal. He then demonstrated the ability to open his eyes wide, shut his eyes tight and open his mouth wide without pain. This demonstrated absence of any damage to the facial nerve. There was complete preservation of function with no neuropraxia or other neurological deficits.