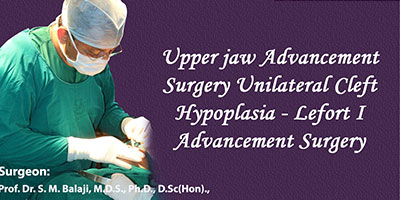 This young lady had been born with a unilateral cleft lip and palate. She had undergone cleft lip repair at our hospital at the age of 2 months. Cleft palate repair was later performed at the age of 10 months. After this, she had rhBMP-2 surgery for uniting the two pieces of the maxilla into one single bone. The patient now has a hypoplastic retruded maxilla with anterior crossbite. This had been causing her cosmetic problems with a deficient upper jaw. She wanted to have this corrected through surgery. The patient has also been undergoing fixed orthodontic treatment for cosmetic teeth alignment.

Dr SM Balaji is a renowned cleft lip and palate patient rehabilitation specialist. He decided to perform a LeFort 1 osteotomy with maxillary advancement for the patient.

Under general anesthesia, a mucogingivoperiosteal flap was first raised in the maxilla. A LeFort 1 osteotomy was then performed. The maxillary bone was then advanced by 2 cm. It was then stabilized in place with four L-shaped four-holed plates. Occlusion was then checked and deemed to be in perfect alignment. The mucogingivoperiosteal flap was then sutured back in place. She would need further fixed orthodontic treatment to perfect her teeth alignment.

Postoperative period was uneventful. The patient expressed her happiness at the results of the surgery before discharge.