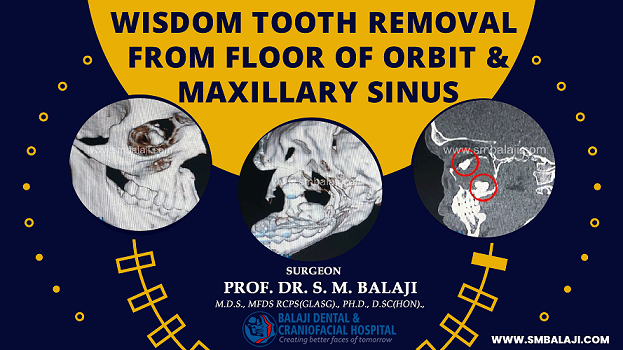 The patient is a 22-year-old male from Chennai in Tamil Nadu, India. He began feeling a heaviness in the maxillary region about a year ago. The tone of his voice also felt muffled. He said that he developed a throbbing feeling in his right midface region.

There was also a persistent dull headache that was present most of the time. He also had a discharge from his nose that had a foul smell.

The patient underwent a course of antibiotics and antihistamines that were prescribed at a local hospital. However, this offered no relief from his symptoms. The doctor has then obtained imaging studies that showed the presence of a tooth in the floor of his right maxillary sinus.

It was felt that the patient needed a dentist or oral surgeon to address his problem. He had then been referred to our hospital for surgical management of his impacted tooth.

Initial consultation at our hospital for management of his impacted tooth

A biopsy of the lesion returned with the diagnosis of maxillary sinus dentigerous cyst. The cyst lining had proliferated to fill up the entire sinus cavity. Air is normally present within the paranasal sinuses to provide resonance to the voice.

Maxillary dentigerous cysts are relatively uncommon when compared to mandibular dentigerous cysts. However, treatment remains the same with complete enucleation of the cystic lesion from the surrounding bone.

Treatment planning was explained to the patient in detail. He expressed understanding of the treatment plan and consented to surgery.

Under general anesthesia, a gingivoperiosteal flap was raised in the right posterior maxillary (gum tissue) region. Access was gained into the maxillary antrum. Exploration of the sinus cavity was done. The impacted wisdom tooth was identified.

There was a dense proliferation of the cystic lining, which completely filled the antrum. This was the reason behind the feeling of fullness and heaviness that he had complained about.

Thorough irrigation with saline solution was then performed. Extreme care was taken to ensure that there was no damage to any of the surrounding tissues. The gingivoperiosteal flap was then closed with sutures. General anesthesia was reversed and the patient was taken to the recovery room.

The patient stated that his head felt good for the first time in many years. He said that the midfacial heaviness and stuffiness had completely resolved. His voice also sounded more resonant and the dullness to it was completely absent.

He also said that his breathing also felt better and the air felt fresh and more invigorating. The patient and his family thanked the surgical team before the final discharge from the hospital.