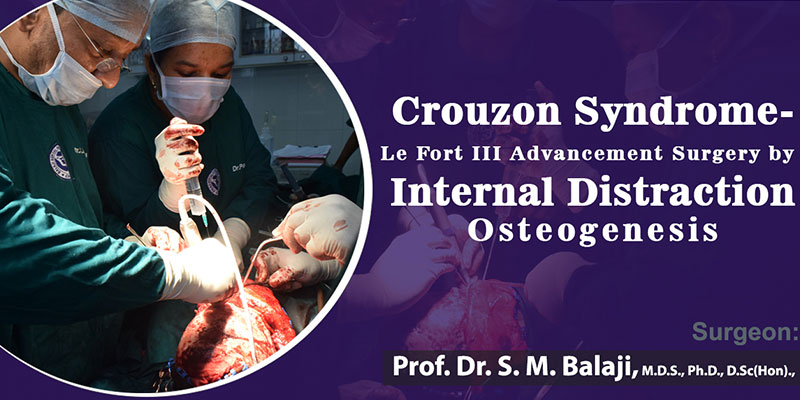 Crouzon syndrome is a rare genetic disorder with premature fusion of a few skull bones. This fusion prevents the skull from growing in all three dimensions. The shape of the head and face is most affected by this along with the mid-facial structures. This leads to wide-set, bulging eyes due to shallow eye sockets. The retruded middle part of the face results in an abnormal appearance. Surgery is the only treatment modality for adult patients.

This is a 15-year-old from Ajmer, India. He had undergone surgery for craniosynostosis elsewhere at 10 years of age. He presented to our hospital for facial reconstruction. His midface retrusion was causing him breathing and eating difficulties. Dr SM Balaji examined the patient and ordered diagnostic studies. He explained his proposed treatment plan to the patient. This would involved a Le Fort III advancement. The patient and his parents agreed to the treatment plan.

Under general anesthesia, an incision was first made over the old scar. A bicoronal flap was then raised. The scalp was then dissected till the glabella and supra-orbital notch. Plates from the previous surgery were first removed. Careful bony cuts were next placed in four regions. These were the zygomatic arch, frontozygomatic sutures, floor of orbit and nasion. In the midline, the vomer and the ethmoid bone were then separated from the cranial base. Pterygomaxilary dysjunction was first done through the intraoral approach. His entire midface was now detached from the skull.

Attention was next turned towards placement of the Kawamoto distractors. First, the right temporalis muscle was dissected to gain access to the area. The distractor was then fixed with the help of screws to the skull and to the orbital border. Distraction was next tested and found to be perfect. The same procedure was next performed on the left side. After surgery, a latency period of six days was then given for bone stabilization. Distraction of 1 mm each day will be performed until adequate advancement of the midface. A total of 18 mm distraction was planned for this patient to be performed over a period of 18 days. The patient recovered from general anesthesia without event.

The distractor will be kept in place for three months for bony consolidation. It will then be removed to be followed by orthodontic treatment.

Postsurgical results were very satisfying for the patient and his family. He and his family expressed their gratitude before discharge from the hospital.