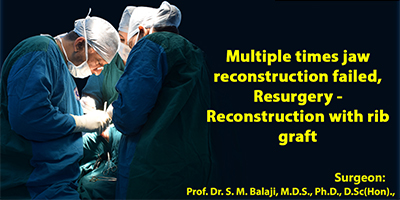 The patient is a young man who lost his right mandible due to ameloblastoma. He had ignored it for years and this resulted in extensive loss of bone from the left lateral incisor. The left side of his mandible had been absent since the ameloblastoma surgery. He has undergone five bone grafting surgeries elsewhere since then. None of the surgeries had been successful and he has extensive scarring in the region. His family conducted an extensive Internet search for the best facial reconstruction surgeon. It led them straight to our hospital.

Reconstruction of right condyle, ramus and body of mandible

Dr SM Balaji examined the patient and ordered a 3D axial CT scan. The scan revealed complete absence of the ramus and condyle on the right side. There was extensive bone destruction of the body of the mandible. The treatment plan was then explained to the patient who agreed to the surgery. This would be by using transport distraction and microvascular reconstruction

Under general anesthesia, two costochondral rib grafts were first harvested from the patient. A Valsalva maneuver demonstrated absence of perforation into the thoracic cavity. The incision was then closed in sutures.

Completely reconstructed right side of mandible

The next stage of oral rehabilitation would be through the use of implants. These would be on the grafted bone thus giving the patient normal dentition.