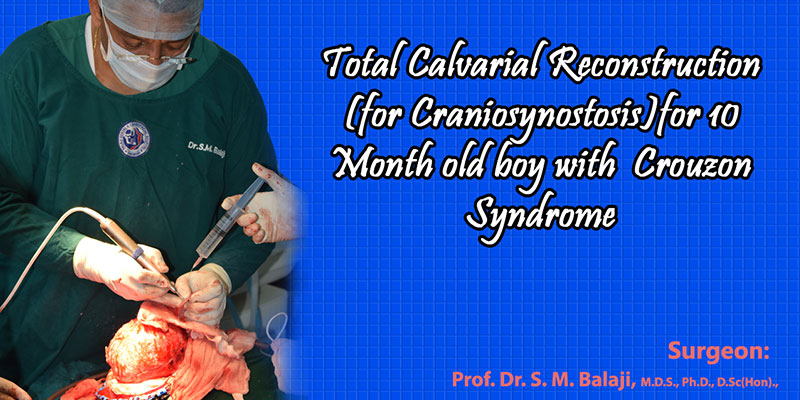 The patient is a 10-month-old boy with premature closure of cranial sutures. He had the typical presentation of bulging eyes (exophthalmos). His parents brought him to our hospital for definitive treatment. Dr SM Balaji and the neurosurgical team examined the patient. Extensive investigative studies were then ordered for the patient. A 3D CT revealed premature fusion of the bilateral occipitoparietal sutures.

The exophthalmos in his case arose from shallow orbital cavities. Parents were then counseled about his condition. The premature closure of the sutures would cause increased intracranial pressure. This would result in impaired brain development. Complications that could arise from this were also explained to the parents. The parents agreed to the surgery. A 3-D stereolithographic model was then obtained for performing mock surgery.

The entire neurosurgical team was present for the surgery. This surgery would be a multidisciplinary undertaking. Under general anesthesia, markings were first made on the scalp for the incisions. A bicoronal incision was then made and scalp reflected. A craniotome was then used to make the bone cuts. The craniotome utilizes a clutch that stops it after penetration through the bone. The meninges are thus protected from damage. Our hospital was one of the first in India to get a craniotome. This was way back in the early 2000s. The different sections of the skull bones were then removed and barrel stave cuts made in them. This was to accommodate the growth of the brain.

It was planned to fix the bony segments with sonic weld. It is used with resorbable plates. A galvanic current passes through the screwdriver that is utilized to fix the sonic weld. This melts the screws thus making it flow into the trabeculae. The screws and plates hold the bones together for a period of three months. They resorb after three months thus allowing for normal bone development. Adequate barrel stave relief cuts were then made in the sections of the skull bones.

The frontal bone was then fixed back again using resorbable plates with sonic weld. Each bone section was then sutured to the duramater using resorbable Vicryl sutures. This was for added stability of the bone. These sutures and the sonic weld will completely dissolve on their own. This would make it unnecessary to perform a second surgery to remove them.

The bones were then checked to ensure correct placement. Sonic weld was perfect. The bicoronal flap was then placed back into anatomic position. Closure was then done using surgical staples.

The patient recovered well from general anesthesia without event.

The patient was playful and happy a few days after surgery. He was interacting in his usual friendly way with the staff in the hospital. His parents expressed their gratitude to the whole surgical team. Their son would develop as a normal boy.